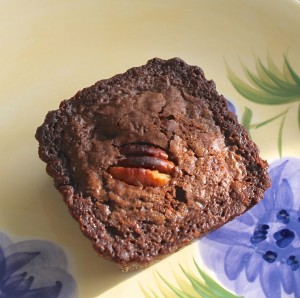 Several years ago I bought a square bun tin – like a muffin tin except the holes are square.  I can’t even remember why I bought it now but I used it once or twice and then it sat in the back of the cupboard along with various other weird and wonderfully shaped cake and muffin tins.  It looks like this and can be bought from Amazon.  You can get them without the fluting too which I think might be better but this is the one I have! 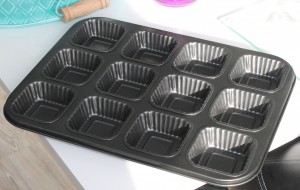 Yesterday I watched Anna Olson Bakes whilst having my early morning coffee and she made salted pecan brownies using one of these tins and suddenly I felt inspired!  I hate it when you make brownies and to get the inside bits to be cooked enough the outside bits are too cooked and this pan gets round that.  I also liked the idea of salted pecans.  I had a big bag of pecans in the cupboard as I was going to have a go at making pecan pie this Halloween so off I went.

Well the brownies are really good.  There aren’t many left.  They’re really gooey in the middle.  I don’t even normally like chocolate cake things. 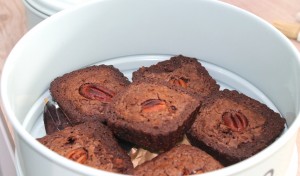 But the true hero of the whole thing is the salted roasted pecans.  I added a few more than suggested to the pan so that I could taste them before I added them to the brownie mix just in case I didn’t like them.  I had to employ every ounce of self-control I possess not to just sit down with the pan and eat the whole lot.  They are definitely going to be a thing in my household from now on!

I don’t want to infringe on somebody else’s copyright so I haven’t put the recipe here but if you follow the link above it takes you to the Food Network page with the full recipe.  For once I followed a recipe fully…..well right up to the end when I added half a cup of chocolate chips because I couldn’t resist meddling.  So good.  The best brownie recipe I’ve tried to date.

Whilst trying to find you the link to these, I ended up on Anna’s own website and came across her recipe for rich chocolate brownies using mayonnaise.  I’ve not come across that before so I now have a tray full of those baking in the oven.  I also have a house full of teenagers getting ready for a party this evening so I’m not entirely confident of my ability to get any photos of those before they are consumed.  The batter tasted pretty good though!