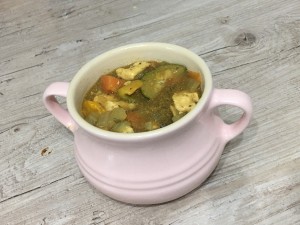 This was our dinner tonight.  There’s enough of this chicken and veg stew over for at least another four probably five servings so I shall be freezing it once it’s cooled down.  I’m glad for all the takeout tubs I’ve been saving for a rainy day!  Just right for two portions.

I used veg that needed using up and stopped only once the pot was full – disappointed I couldn’t get any lentils in there!  I think a stew needs the onion and carrot but you could substitute pretty much anything else for what you have on hand.  As I’m catering for someone who avoids starchy carbs, I didn’t put in any potato but if you did then it would be a complete one pot meal.

I used chicken stock as I had a load taking up space in the freezer but you could use stock cubes just as easily.  I made a slurry to thicken the stew but again, gravy granules would work too.  I added garam masala just to up the flavours, curry powder would work too but it didn’t taste bad without.  Finally there is the odd ingredient that I put in that I wouldn’t expect anybody else to have and that is the Sanatogen Wine……I opened this the other day when I was making beef in Guinness and needed port but didn’t have any open.  It’s something I’ve had in my cupboard for about eight years – it was a raffle prize I won and just didn’t know what to do with.  It’s quite sweet, a bit like port or Madera wine but not as nice to drink.  It is though fine as a substitute in cooking.  I would probably have added white wine to this had the Sanatogen not been open anyway though.

Slurry of 2 heaped teaspoons of cornflour with water