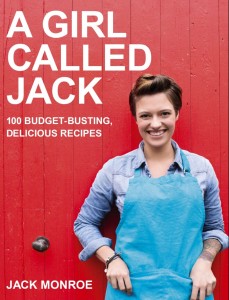 A recent success story of a cookbook is Jack Monroe’s A Girl Called Jack, which I confess I bought on the recommendation of a Tweet.  I’ve bought 3 of these as gifts and know I’ve been responsible for at least 4 other purchases of this one – one of which because I loaned my version to a friend who used so many of the recipes she made my version all sticky and felt she’d better buy me a new one!

I can’t recommend this book enough to anyone trying to work to a tight budget – she started a food blog when she was trying to feed herself and her small son on a budget of £10 per week!  Nigella recommends it too.  What’s lost in cost is definitely not lost in flavour in her recipes and they are all really easy to follow and substitute in the ingredients you prefer.

She’s not at all “chefy” and doesn’t use exotic, hard to come by ingredients or impossible to follow methods.  I particularly like her peach and chickpea curry recipe.

She has a website with lots of other recipe suggestions at http://agirlcalledjack.com